That means you can use any data type in the list as far as all items are of the same type or types can be converted by SQL Server.

It is pretty easy. What about the limits?
Books Online do not mention any limits. The biggest number of items I was be able to test with was 4426. That depends also on size of items and on the first parameter, which value has to be chosen.
In some cases I've got following error:
Msg 8631, Level 17, State 1, Server Bla-Bla-Bla, Line 1
Internal error: Server stack limit has been reached. Please look for potentially deep nesting in your query, and try to simplify it.

Here are automated testing results for SQL Express 2014: In Research batch script I was be able to execute "CHOOSE" function with 4981 items and item size upper than 60 bytes each (probably goes higher, but I've stopped the test).

However, in manual mode it shows even better results: Up to 4985 Items with item size 64Kb !!!
I'd consider it as a pretty high limit with query size as big as  300 Mb.

The second function is "IIF" !!!
It was more than 20 years available in MSAccess version of SQL and I really missed it.

For those who do not know what it is: It is just a shorter version of "CASE" clause, which chooses between only two choices.

Unfortunately, do not think a lot of people will be using it because of it slowness.
Posted by Slava Murygin at 2:50:00 PM No comments:

I've tried to do some exercises on my local VM with SQL Server Express edition, required Dedicated Admin Connection (DAC).

Faced the problem that I can not actually do it. After a short research found very easy solution.

1. Run SQL Server Configuration Manager. You can use an icon from windows menu or if it is not available you might use the following (or modified for your system/version) command:
C:\Windows\SysWOW64\mmc.exe /32 C:\Windows\SysWOW64\SQLServerManager12.msc

2. In Configuration Manager locate your SQL Server instance and choose properties by right click on it.

Another way to do the same thing is would be editing Windows registry by RegEdit.exe
You just have to add  new key "SQLArgX" with "-T7806" in
HKEY_LOCAL_MACHINE\SOFTWARE\Microsoft\Microsoft SQL Server\MSSQL12.MSSQLSERVER\MSSQLServer\Parameters


Also, in order to be able to establish DAC you have to enable it within your SQL Server configuration:


The last step of DAC is connection itself. You have to specify word "ADMIN:" before the server name:

You can have ONLY ONE Dedicated Admin Connection per server at any given moment.
That means: do not forget to close your connection after the exercise and leave ability to connect to your server open at any moment in the future. Learn to do the same in production too.
Posted by Slava Murygin at 11:38:00 AM No comments:

Email ThisBlogThis!Share to TwitterShare to FacebookShare to Pinterest
Labels: Administration

How to hide your data within a SQL Server Database

Want to bring your attention to a little and very simple SQL hack.

Do not think anybody can use it in production, but it is still surprisingly interesting and might be dangerous.

At first, will create a table, insert couple of records and verify how it looks:

Both records are visible and available for anybody who has select permission on that new table.

Now will do a trick, add leading zero-character:

Will try to extract data again:


Test is there, you can tell it by data length numbers, but you do not see it:

Only the way to see the text again is to suppress the leading zero-character:

Now you can see the hidden text.

Interesting that despite of leading zero-character we still can use hidden string for executions:

That statement will be successfully executed and return a value


(That might be the dangerous part, when executed invisible statements produce some results)


Do not forget to cleanup after yourself:

Still under impression of Kimberly L. Tripp session "Dealing with Multipurpose Procs and PSP the RIGHT Way!" on PASS Summit 2014 in Seattle.

It was wonderful session with a simple idea of how to make Multipurpose Stored Procedures work faster. I did a research couple of years ago on similar topic, but I did not come up with such a wonderful idea.

At first, will explain what it is a Multipurpose Stored Procedure.

Look from a developer's perspective: There is a business need to have a search for a client and it has to be universal search by any client's attribute. There can be entered anything: Part of first or last name, part of email address, phone number, account number, part of a street address. There even more intelligent requirement to search not just by one, but also by two, three or more parameters.

How would you implement that?

It would be nice to have a stored procedure which would be called in a way like in example below: 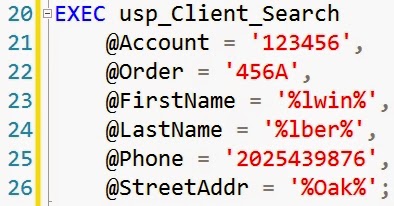 There are several different ways to implement that logic. The most straight way looks like this: 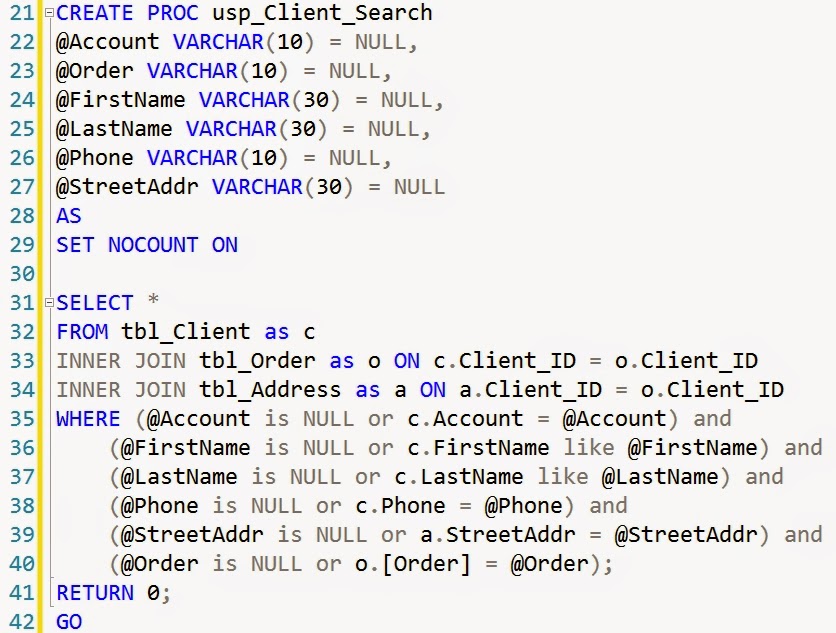 That approach is the easiest one and it is the least optimal.
That might easily happen that generated plan for that query will be horrible for the most of passing to that stored procedure values. 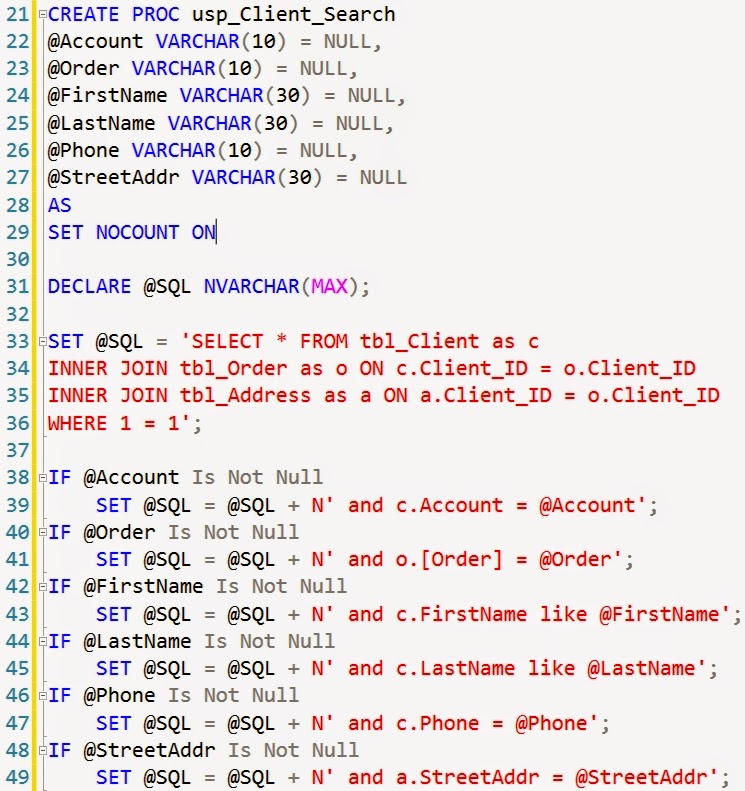 That code with recompilation will work better because there will be no "bad" query generated.
However, that solution still can hit the scalability ceiling. Each run of that stored procedure will still cause plan recompilation and high CPU usage.

Kimberly's idea was that we do not have to recompile ALL plans. For queries where we expect return of single row and which will use an index we can leave the plan in cache.

I think that is a brilliant idea. It will save recompilation CPU time for all requests, which will do index seek and return one or few items.

In my example, these kind of plans will be produced in case we supply @Account, @Order or @Phone variables.

So, here is the changed second part of my stored procedure to demonstrate that idea:

In case of @Account, @Order or @Phone variables "OPTION (RECOMPILE)" won't be added to a query and that query will stay in cache for future usage.

Thanks Kimberly for great idea.
Posted by Slava Murygin at 7:20:00 PM No comments:

New Functionality in my own understanding:

I’ve tried to capture as many details as possible and come up with reasonable explanation.

sys.query_store_runtime_stats
* The best guess.
** No clue.

Below is a possible data schema for the new feature:

How does it work?
Here are the sample steps of performance troubleshooting in the new environment:

Here are queries for the first and the last steps:
Step #1. Altering database to be covered by Query Store:

Step #5. Mark fastest plan to be used for the query:

For “sp_query_store_force_plan” you have to supply plan_id as a parameter.
(The second parameter is unknown. That can be query_id or context_settings_id)

There can be situations when:

-        Some metadata have changed that causes Forced Plan to fail.

In these cases you can un-force a forced plan by following command:

(I assume that stored procedure is accepting the same parameters as the forcing one).

I believe hundreds of thousands of SQL Servers in the world struggling because of bad execution plans, by some reason, pushed out good ones.


The new SQL Server “Query Store” feature will solve that problem and definitely be a very useful tool in hands of knowledgeable DBAs.


Please fill free to contact me in case you think I did not understand all new functionalities correctly or by the time when that feature officially go to a release some will be changed or new be added.